Group Photo of IFS section taken in May 2019

Before joining the Fed, I completed my Ph.D. in Economics at New York University in May 2018.

I completed my M.A. in Economics and B.Sc in Financial Economics at the University of Toronto from 2008-2012. My daughter Sophie is a Canuck and was born at Scarborough, Ontario in 2016.

My wife Siqi and I at my M.A. Graduation Convocation

I was born and raised in a city in the northern part of China called Jinan. It is renowned for its lakes and springs. People in China often refer it as 泉城 (Spring City). 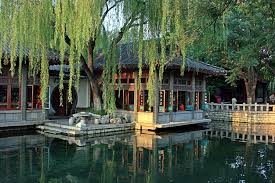 I am a zealous supporter for Toronto Blue Jays in MLB over a decade, a new fan for New Jersey Devils in NHL and have been cheering for LA Lakers in NBA since 2016. I am also an active advocate for esports.

Photo after Devils 5-2 win against TB Lightning in the Game 3 of the first round of 2018 Stanley Cup Playoffs at Newark, NJ

My Chinese name is 马赛 (Mǎ Sài), named after the city Marseille in France by my dad because one of his best buds named his daughter Lyon for whatever reasons. My first name Sai is pronounced literally as [S-ai] or thigh or..